One API To Rule Them All

In my previous life as a Solutions Architect at EMC, I led a project at a large Enterprise account to deliver a self-service, on-demand, elastic infrastructure.  The solution included a web portal where lines of business (LOB) could request compute, network, and storage resources; the request would be automatically routed through the appropriate management chain and upon approval, resources would be automatically provisioned.  We were evern able to implement a chargeback system that allowed the LOB to choose and to pay for resources with different pricing, based on service levels.  Not an easy feat, even if we had used the Cloud enabling technologies that exists today, such as VMware’s vCloud Suite, OpenStack, CloudStack, or Virtustream xStream.  It was an even more daunting task given that the project took place back in 2002 and all compute resources at this customer were Solaris or Windows servers, with no enterprise virtualization capabilities available.

One key enabler for this early “Cloud” was the decision by the customer to standardize on a specific hardware and software stack.  Through a long and sometimes painful remediation process, they were able to reduce their configuration options to a manageable number of OS versions and hardware firmware.  This allowed us to abstract the stack to a set of compute, network, and storage resources that could be presented to users in a service catalog.  The other enabler were hardware APIs that we could script to and integrate with as part of a provisioning workflow.  This provisioning workflow itself was called out by other scripts as part of the resource request and approval workflow.

There were, however, a number of issues with the approach that was taken to build this nascent Cloud:

The immediate benefits of this approach include the following: 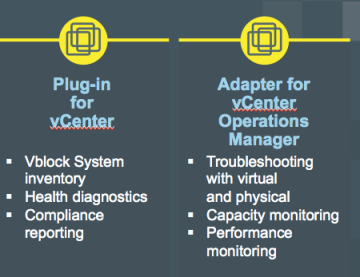 The plugin will allow vCenter to visualize and to monitor a Vblock as an integrated converged infrastructure system in a way that it could not do with a reference architecture.  The vC Ops adapter will present users with health, capacity, and risk badges for the entire Vblock as an integrated system and not just the virtual machines that sit on top of the hardware stack. 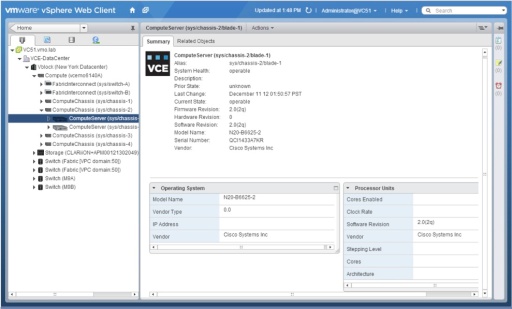 You will note that the first release of Vision Intelligetn Operations is focused on visualiazation and monitoring.  However, as I discussed in a previous blog post on the Software-Defined-Datacenter, the true value of a converged infrastructure system is fully realized when it can be provisioned and changed, programmatically and dynamically, in response to changing requirements.  The long-term strategy is that the APIs and libraries exposed via Vision Intelligent Operations will allow the northbound managment system to control and perform this function. So look for more to come from VCE.