Recently, my colleague, Cody Bunch (he’s one presenting in bare feet), and I had the privilege of giving a keynote at the New England Virtualization Technology User Group (NE VTUG) Winter Warmer.  There, we were able to address a room of VMware administrators and architects who were interested in learning about OpenStack.  The keynote was a revised version of the talk Scott Lowe, from VMware, and I had given at the recent OpenStack Summit in Hong Kong.  As I’ve now had multiple opportunities to give this talk and sat in numerous conversations with customers to discuss this topic, it is clear to me that there is growing curiosity and interest about OpenStack in the VMware community.

The revised deck from the aforementioned talk can be found on SlideShare and  can also be viewed below. My goal in this post is not to walk through the deck slide by slide but to provide a summary of the talk and to hit on some major points.

The outline of the talk is as follows: 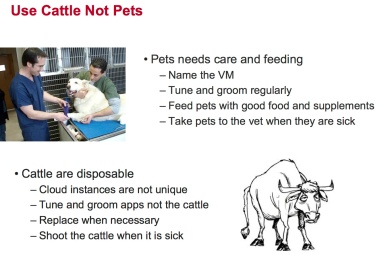 To understand the how and the why of the OpenStack architecture, one must begin with the design principles of Cloud Computing and how Infrastructure-as-a-Service (IaaS) aims to deliver resources and services to tenants: 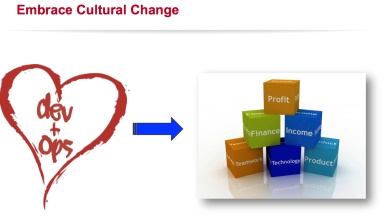 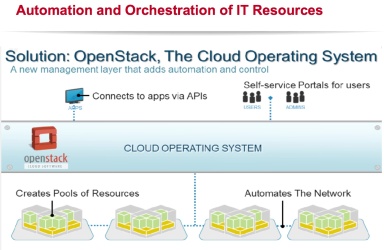 Some folks, including VMware administrators, mistakenly think that OpenStack is a hypervisor like vSphere.  In fact, OpenStack is a manager of multiple hypervisors, including vSphere, KVM, Xen, Hyper-V, etc..  But more than just a hypervisor manager, OpenStack is a collection of tools for managing and orchestrating multiple types of virtual resources.  Vendors such as EMC and VMware have historically focused on virtualizing hardware resources, such as compute, network, and storage so that disparate components can be pooled and used more efficiently.  However, these are still siloed resources with their own distinct control planes and tools.  OpenStack sits above these pools of virtualized resource as a master control plane that provides users with a single point of control and orchestration; this enables end-users to access IT resources on-demand and at scale using a dashboard, command line, or via open APIs.  Unlike vSphere, which is a monolithic product with a certain set of features, OpenStack is a collection of open source software projects that are tied together via APIs and a common authentication mechanism.

VMware’s flagship vSphere product has a monolithic and tightly coupled architecture.  The vCenter Server can be designed to have its database running on a separate server; however, it doesn’t take advantage of a message queuing system and cannot distribute its services across multiple control nodes, effectively limiting the scalability of vSphere itself  In contrast, OpenStack was designed from the very beginning to deploy and manage resources at scale and as such, has a distributed and loosely coupled architecture with an enterprise message queuing system. 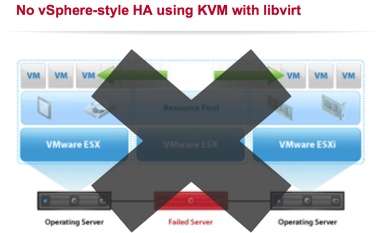 When I explain this to VMware customers and administrators, they are often surprised by the lack of “Enterprise-level capabilities” such as DRS and HA.  This is where an understanding of the Cloud principles that inform the design of OpenStack, contrasted with the legacy data center principles that informed the design of vSphere, is important.  Recall that we assume Cloud resources are ephemeral, failure is inevitable, and scalability is a requirement; the best design to handle that reality is designing for failure at the application layer and going with a share nothing, scale-out design.  A Cloud platform built on those principles and assumptions should not require features like HA or DRS.  Instead we can focus on building an anti-fragile system that is adaptable to changing conditions and is flexible enough so that each failure can be learned from to create a more robust system.

So is VMware strictly a competitor to OpenStack, which is what most people would assume?  The reality is that VMware is both a competitor and a partner, depending on the product and technology in question.  While their vCloud Suite is a clear competitor to OpenStack, VMware has increased their development efforts in regards to integrating vSphere.  But why would a customer consider using vSphere with OpenStack?  Recall that OpenStack was designed for a certain class of applications that are not dependent on the underlying infrastructure for resiliency and fault-tolerance; however, a feature rich hypervisor such as vSphere is probably better suited for legacy applications, such as Oracle and Microsoft Exchange.  So a user who has chosen OpenStack as their Cloud platform but want to run legacy applications on that platform may opt for using vSphere as one of its hypervisors.  Another reason may be that an existing VMware customer already has a sunk investment, in terms of money and personnel, in vSphere and want to leverage that investment while using OpenStack as their Cloud platform of choice.

For these users, they do have the option of deploying vSphere as the lone or second hypervisor in an OpenStack Cloud.  To help enable this option, VMware has created a dedicated OpenStack team with the charter of making VMware technologies a viable option for running with OpenStack.  Besides software development, the Team OpenStack @VMware has been putting out content and demo software to show off their OpenStack integration.

For VMware administrators who are interested in learning more about OpenStack, there are a number of options available to them, including books, blog posts, videos, white papers, and podcasts; examples of these are in the “Resource” section of this deck.  Also, a video of the original Summit talk I collaborated with Scott on can be seen below:

BTW, if you have any questions, need further information, or would like to have me give this talk at an OpenStack or VMware user group meeting, feel free to contact me via e-mail or Twitter.