In my previous post, I provided the proverbial 10,000 foot overview of Apache Mesos and it’s value as a resource manager for the data center.  It’s time to dig a little deeper into the technology and walk though the components that make Mesos such a great candidate for a data center OS kernel.  Most of the details I am walking though comes from a white paper that Ben Hindman and his team at UC Berkeley published back in 2010.  Btw it is worth noting Hindman has moved on from Twitter to Mesosphere, a startup that is building and commercializing a data center OS with Mesos as the kernel.  I will focus on distilling the main points of the white paper and then offering some thoughts on the value of the technology.

Le’s start by picking up where we left off in my previous post and looking at the  diagram and description below from the aforementioned UC Berkeley white paper and from the Apache Mesos website: 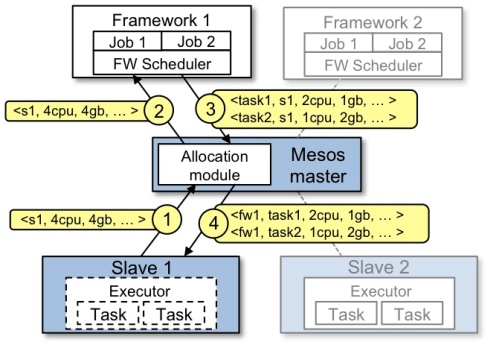 Let’s walk through the events in the figure above.  Remember from last time that the slaves are Mesos daemons running on either physical or virtual servers that are part of the Mesos cluster.  A framework is a combination of an application scheduler and task executor that is registered with Mesos to take advantage of resources in the Mesos cluster.

To achieve the goal of allowing multiple tasks to run on the same set of slave nodes, Mesos uses what it calls isolation modules to allow a number of application and process isolation mechanisms to be used for running those tasks.  It’s probably no surprise that although an isolation module could be written to use virtual machines for isolation, the current supported modules are for containers.  As far back as 2009, Mesos leveraged Linux container technologies like cgroups and Solaris Zone and those are still the defaults.  However, the Mesos community has added support for Docker as the isolation mechanism for running tasks.  Whichever isolation module is used, the executor packages up all that is needed to run a particular application’s task and launches it on the slaves that have been assigned to that task.  When a task is complete, the containers are “broken down” and the resources released for other tasks.

Now to the “so what” question when it comes to Mesos. For me, I am most excited by four benefits of the technology (outlined below) and how, as I iterated in my previous post, I see Mesos as becoming the true OS kernel for the next generation data center.

The diagram above from the Mesosphere website illustrates the benefits in efficiency provided by Mesos.  In most data centers today, static partitioning of servers is the norm, even with newer applications such as Hadoop.  This is often the case due to concerns over different application schedulers conflicting and essentially “fighting” each other for available resources when using the same nodes.  Static partitioning is inherently inefficient since you will often have periods where one partition may be resource starved while another is under-utilized and there is no easy way to reassign resources across partitioned clusters.  By using a resource manager like Mesos to be the arbiter between different schedulers, you can move to a dynamic partitioning/elastic sharing model where all applications can use a common pool of nodes to safely maximize utilization.  One often cited example is taking slave nodes that usually run Hadoop jobs and dynamically assigning them to run batch jobs during idle periods and vice versa.  It’s worth noting that some of this can be done with virtualization technologies such as VMware’s vSphere Distributed Resource Scheduler (DRS).  However, Mesos has the advantage of being more granular since it allocates resources at the application layer and not the machine layer and it assigns tasks via container instead of an entire virtual machine (VM).  The former takes into account specific requirements of each application and what an application’s scheduler knows is the most efficient use of resources; the latter allows better “bin packing” since there is no need to instantiate an entire VM, just the processes and binaries required to run a task.

A key design point that allows Mesos to scale is its use of a two-level scheduler architecture.  By delegating the actual scheduling of tasks to frameworks, the master can be a very light-weight piece of code that is easier to scale as the size of the cluster grow.  This is due to the fact that the master does not have to know the scheduling intricacies of every type of application that it supports.  Also, since the master does not have to do the scheduling of every task, it doesn’t become a performance bottleneck at scale as often happens when you have a monolithic scheduler that schedules every task or VM.

I’ll wrap it up here but in the next post, I’ll delve more into the resource allocation module and also explain how fault tolerance works at various levels of the Mesos stack.  Meanwhile, I encourage readers to provide feedback, especially regarding if I am hitting the mark with these posts and if you see any errors that need to be corrected.  I also respond on twitter at @kenhuiny.

You can find my next post on persistent storage and fault tolerance in Mesos here and my post on resource allocation in Mesos here.  I can encourage you to read my post on what I think is going right with the Mesos project.  If you are interested in spinning up and trying out Mesos, I link to some resources in another blog post.