AWS re:Invent 2016 Second Keynote Recap: We Are All Transformers

After a whirlwind of product announcements from CEO Andy Jassy the previous day, it was time for Werner Vogels, CTO of Amazon Web Services, to take the stage. You can view the keynote in its entirety below. You can also read on to get a digest of Vogel’s keynote along with links to get more information about the announced new services.

Sporting a Transformers t-shirt, Vogels talked about AWS’s role in helping to bring about IT transformation. He very specifically addressed users, particularly developers, about their role as transformers in the places where they worked. AWS can do this, explained Vogels, because they have strived from the very beginning to be the most customer centric IT company on Earth.

To meet their goal of making their customers transformers in their businesses, Vogels talked about three ways that AWS can help create transformers.

In the area of development, Vogels emphasized the importance of code development and testing because that’s where users can experiment and where businesses can be agile.

To help users transform the way they do development and testing, Vogels focused on AWS products, old and new, that help bring about operational excellence, particularly in the areas of preparedness, operations and responsiveness.

In the area of preparing, Vogels talked about the importance of automating as many tasks as possible in order to build reliable, secure and efficient development, test and production environments. A key service to enable automation on AWS is CloudFormation and although no new announcements were made in this area, Vogels took some time to review the new features that have been added to CloudFormation in 2016.

Many customers make use of Chef cookbooks to prepare and to configure their AWS environments. This is in large part because of AWS OpsWorks which is a configuration management service based on Chef Solo. Taking this to the next step, Vogels announced a new AWS OpsWorks for Chef Automate service. This new service provides a user with a fully managed Chef server to removed one more operational burden they had to contend with previously. You can read more about AWS OpsWorks for Chef Automate here.

Moving on to systems management, Vogels announced Amazon EC2 Systems Manager, which is a collection of AWS tools to help with mundane administration tasks such as packaging, installation, patching, inventory, etc.. You can read more about AWS EC2 Systems Manager here.

Transitioning to operating as the next area of operational excellence transformation, Vogels made the argument that code development and continuous integration/continuous deployment is a crucial part of operations. After reviewing the existing services that AWS has to assist users with making the code development process more agile, Vogels announced AWS CodeBuild to go with the existing CodeCommit, CodeDeploy and CodePipeline services.

AWS CodeBuild is a fully managed service that automates building environments using the latest checked-in code and running unit tests again that code. This service streamlines the development process for users and reduces the risk of errors. You can read more about AWS CodeBuild here. Another key aspect of operating is monitoring. As he had done previously, Vogels reviewed the existing services that help users gain visibility into their environments.

Taking the next step to help users gain deeper insights into how their applications are running, Vogels harkened back to Jassy’s keynote theme of superpowers to introduce AWS X-Ray. Acknowledging the difficulty of debugging distributed systems, AWS released X-Ray to give users the ability to trace requests across their entire application and to map our the relationship between various services in the system. This insight makes it easier for developers to troubleshoot and to improve their applications. You can read more about AWS X-Ray here.

The final area of operational excellence Vogels covered was responding. How can users respond to errors and alarms and do so in an automated fashion that can also escalate issues in a timely fashion when necessary?

One answer from AWS is the new AWS personal Health Dashboard. Based off the existing AWS Service Health Dashboard, this new service provides users with a personalized view of the system health of AWS. The new dashboard will show the performance and availability of services that is being accessed by a user. Users will also receive alerts that are triggered by a degradation in the services that are being leveraged by them and users can write Lambda functions to respond to those events. You can read more about AWS personal Health Dashboard here.

AWS and their customers also have to respond to security issues. Distributed Denial of Service attacks have been the top threat for web applications with many different types of attacks at different layers of the networking stack. Historically, most of these DDoS attacks have tended towards Volumetric and State Exhaustion attacks.

To address these attacks, Vogels announced AWS Shield. This is a managed service that works in conjunction with other AWS services like Elastic Load Balancing and Route 53 to protect user web applications. AWS Shield comes in two flavors – AWS Shield Standard and AWS Shield Advanced. Standard is available to all AWS customers at no extra cost and protects users from 96% of the most common attacks.

AWS Shield Advanced provides additional DDoS mitigation capability for volumetric attacks, intelligent attack detection, and mitigation for attacks at the application & network layers. Users get 24×7 access to the AWS DDoS Response Team (DRT) for custom mitigation during attacks, advanced real-time metrics and reports, and DDoS cost protection to guard against bill spikes in the aftermath of a DDoS attack. You can read more about AWS Shield Standard and AWS Shield Advanced here.

Transitioning away from transforming operational excellence, Vogels moved to transformation though using data as a competitive differentiator. Because of the cloud, Vogels asserted, everyone has access to services such as data warehousing and business intelligence. What will differentiate companies from each will other will be the quality of the data they have and the quality of the analytics they perform on that data.

The first new service announcement that Vogels made in this area was AWS Pinpoint. Pinpoint is a service that helps users run targeted campaigns to improve user engagement. It uses analytics to help define customer target segments, send targeted notifications to that target segment and track how well a particular campaign did. You can read more about AWS Pinpoint here. 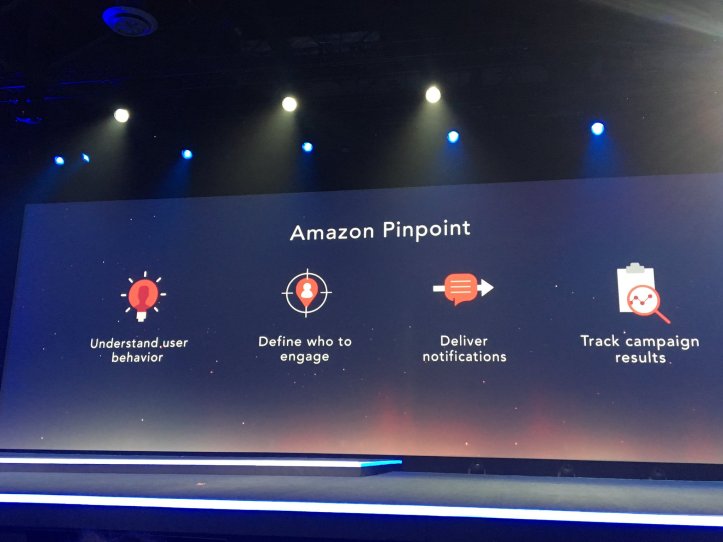 Vogels argued that AWS already has number of services to address most of the  work that falls into that 80% bucket. To address even more of that 80%, Vogels introduced a new service called AWS Glue. Glue is a data catalog and ETL service that simplifies movement of data between different AWS data stores. It also allows users to automate tasks like data discovery, conversion, mapping and job scheduling. You can read more about AWS Glue here.

By adding AWS Glue, Vogels argued that AWS now has all the pieces required to build the industry’s best modern data architecture.

Another need for users in the is space, said Vogels, is large-scale batch processing which normally requires a great deal of heavy lifting to set up and use. To help here, Vogels announced AWS Batch. Batch is a managed service that lets users do batch processing without having to provision, manage, monitor, or maintain clusters. You can read more about AWS Batch here. 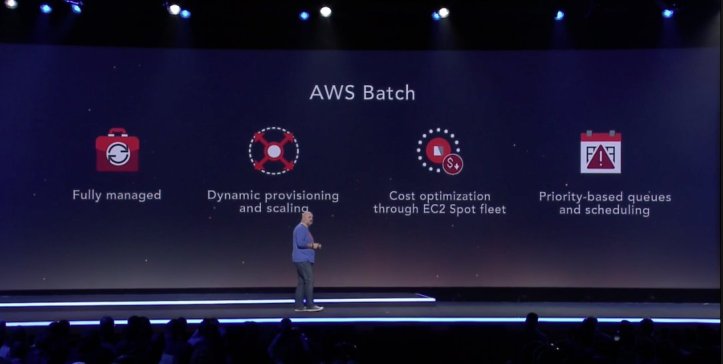 The last area of transformation Vogels addressed took him back to the roots of AWS – Compute. Except of course, “compute” at AWS has grown beyond Elastic Compute and virtual machines. Vogels reminded the audience that AWS compute has now grown to also include containers with Elastic Container Service and Serverless/Function as a Service with Lambda.

Since all the new announcements about compute was made by Jassy in the previous keynote, Vogels focused on the containers and Lambda parts of their compute spectrum. For users of ECS, Vogels previewed a new task placement engine which will give users finer-grain control over scheduling policies.

Beyond this, Vogels acknowledged that customers have requested the flexibility to build their own custom container schedulers to work with ECS or to integrate with existing schedulers such as Docker Swarm, Kubernetes or Mesos. To enable this, Vogels announced that AWS is open sourcing Blox, a collection of open source projects for building container management and orchestration services for ECS.

The first two components of Blox will be a cluster state service for handling event streams that came from ECS and the second component will be a daemon-scheduler that will help launch daemons in container instances. You can read more about Blox here. 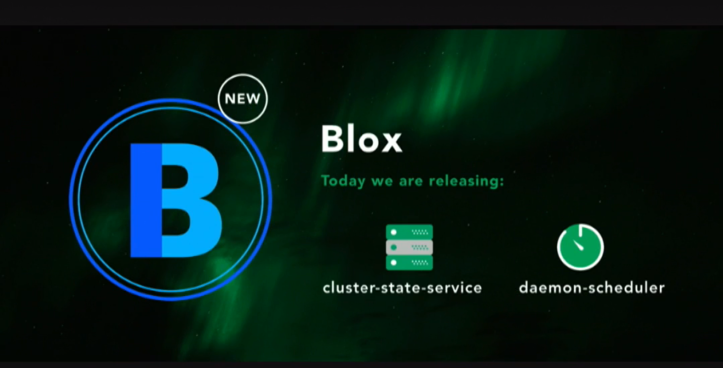 Moving on to the last compute area, Vogels talked about serverless/Lambda. Lambda already supported a number of languages and AWS added to that list by adding support for C#. 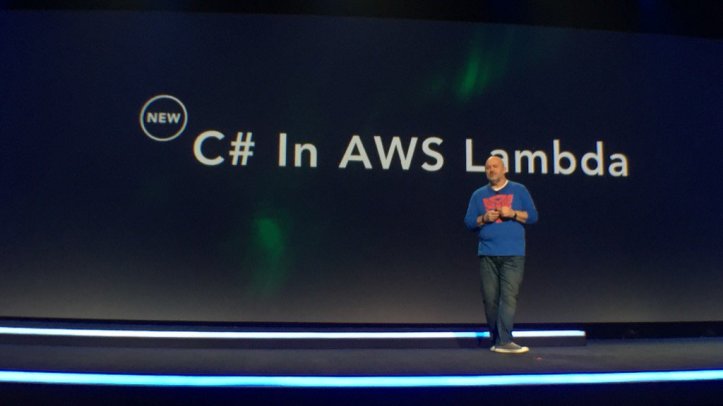 Vogels then mentioned that one the most frequent requests they receive from uses is the ability to execute tasks at the edge of the AWS content delivery network instead of having to go back to a source further away and incurring unwanted extra latency. To address this request, Vogels announced AWS Lambda@Edge. This new service can inspect HTTP requests and execute Lambda functions at CloudFront edge locations when appropriate. You can read more about AWS Lambda@Edge here.

Finally to coordinate multiple Lambda functions in a simple and reliable manner, Vogels announced AWS Step Functions. This service gives users the ability to visually create a state machine which specifies and executes all the steps of a Lambda application. A state machine defines a set of steps that performs work, makes decisions, and controls progress on Lambda functions. You can read more about AWS Step Function here.

Wrapping up his keynote, Vogels summarized all the product announcements that had been made during his and Jassy’s keynotes.

With that, Vogels ended his keynote with a charge to the audience to use all the tools they have been given to go and transform their businesses.