Shhh… Can You Keep A Secret? A First Look at AWS Secrets Manager

It’s no secret (pun intended) that cybersecurity is big news these days. On a daily basis, we are hearing about data breaches, leaked personal information and stolen passwords. Many of these incidents are centered around mismanagement of credentials such as improper storage of encryption keys, databases with default or no password for the admin account and access keys stored in application source code in GitHub or in an unprotected object storage bucket . The problem is compounded when companies move to the public cloud where mistakes in security implementations are magnified.

Werner Vogels, CTO of Amazon Web Services, has proclaimed in recent conference keynotes that “Every developer should be a security engineer’ and that “Security is everyone’s responsibility.” Backing up words with actions, Amazon Web Services (AWS) has been busy pushing out new security services such as GuardDuty and default encryption for Amazon S3 buckets. One of the latest editions to their security portfolio is AWS Secrets Manager which was recently announced at the AWS Summit in San Francisco.

What is Secrets Management?

Secrets management has been a hot topic of late, even before AWS got into the game, thanks to the efforts of folks like those at Hashicorp. They has educating the IT community about secrets and their vision for managing secrets using their open-source tool, Vault. A secret, as defined by Hashicorp, is “anything that you want to tightly control access to, such as API keys, passwords, certificates, and more.” Secrets management involves the storage, protection, lifecycle management and auditing of secrets. This includes encrypting secrets so it can’t be viewed by anyone without access to the decryption key, rotating credentials on-demand or based on policies. and tracking for unauthorized access. And I would argue that the most important component is lifecycle management. Encrypting and storing secrets is not difficult; you could just use an encrypted S3 bucket or encrypted DynamoDB table for that task. But managing the lifecycle of a secret at scale and making sure that secrets are successfully rotated on a regular basis and are revoked when credentials are compromised is where users typically run into challenges.

Managing secrets has always been important but the need for it has increased with the adoption of cloud computing and microservices. While we may have previously only had to be concerned about secrets in one of two servers behind the corporate firewall, secrets now have to be protected and managed for fleets of  instances in the public cloud. It is, therefore, no surprise that AWS has seen fit to jump into this market.

What is AWS Secrets Manager?

You can get more details on features and how-to’s from the user guide and Randall Hunt’s blog post. I want to focus, instead, on the architecture and some observations I have on the service.

The available resources on Secrets Manger is very light, which is to be expected from a new service. The product page and user guide essentially talks about Secrets Manager as a black box with integration to a few AWS services. Here’s what it looks like based on what has been published:

If i were to go further and speculate, I think it is very likely that Secrets Manager is a serverless framework that integrates a collection of AWS services. It might look something like this: 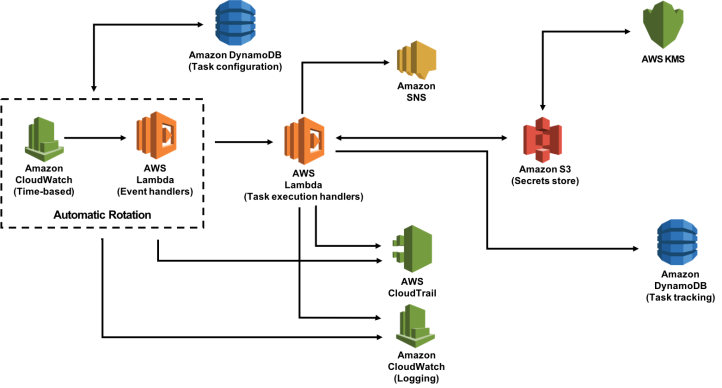 It will be interesting to see how right and how wrong I end up being about the architecture as more details come out about Secrets Manager.

I’ve had a chance to explore AWS Secrets Manager since it was announced and while it has some shortcomings that I will discuss later, I see a bright future for the service and believe it will get even better over time. Historically, AWS has released new services that target specific use cases and then expand those use cases over time by adding new features. Here are some specific observations I have.

There is much to be commended with this first release of Secrets Manager, particularly if you are a heavy user of AWS services such as KMS and Relational Database Service (RDS).

The sample code generated when the secret is created and stored is helpful for updating the applications that will be accessing the secret.

In addition, the out of the box integration with AWS services like KMS and Identity Access and Management (IAM) makes getting started very easy for an existing AWS user.

If you are an RDS user and aren’t currently using a secrets management system, AWS Secrets Manager is pretty compelling with its out of the box integration.

Any product in its first release will have issues and AWS Secrets Manager is no exception. My main criticism of the service is the requirement to have a working knowledge of AWS Lambda for many use cases. Note that I am not critiquing the use of Lambda here but the fact that knowledge of Lambda is required.

To rotate secrets outside of what will be used with an RDS database requires you to know how to write functions in Lambda, the AWS serverless service. In fact, if you want to rotate secrets for a database that you are running on an EC2 instance and managing yourself, you have to write your own Lambda function to automate secrets rotation.

I expect that AWS will create new Lambda rotation functions to address use cases other than RDS. But until then, the need to write Lambda for non-RDS use cases adds complexity to the solution.

I would argue that version 1 of AWS Secrets Manager is more of a secrets store with some management than a full secrets management system. I expect that to change eventually but for now, the management in Secrets Manager seems to be limited to secrets rotation. Along those lines, here are a couple of  key features that I believe are missing:

The benefits of dynamic secrets include mitigating against poorly secured application that may “leak” credentials in logs and artifacts. It also limits the impact of a compromised credential since credentials could be set up as a single-use one-time credential that is mapped to specific request.

Overall, AWS Secrets Manager is a  solid version 1 of a service that is particularly valuable for AWS users who are currently using or plan to use RDS. But Secrets Manager lacks the functionality and maturity of products such as Hashicorp Vault which also has the benefits of not being tied to a specific cloud provider.. However, I look forward to what is coming in future releases.